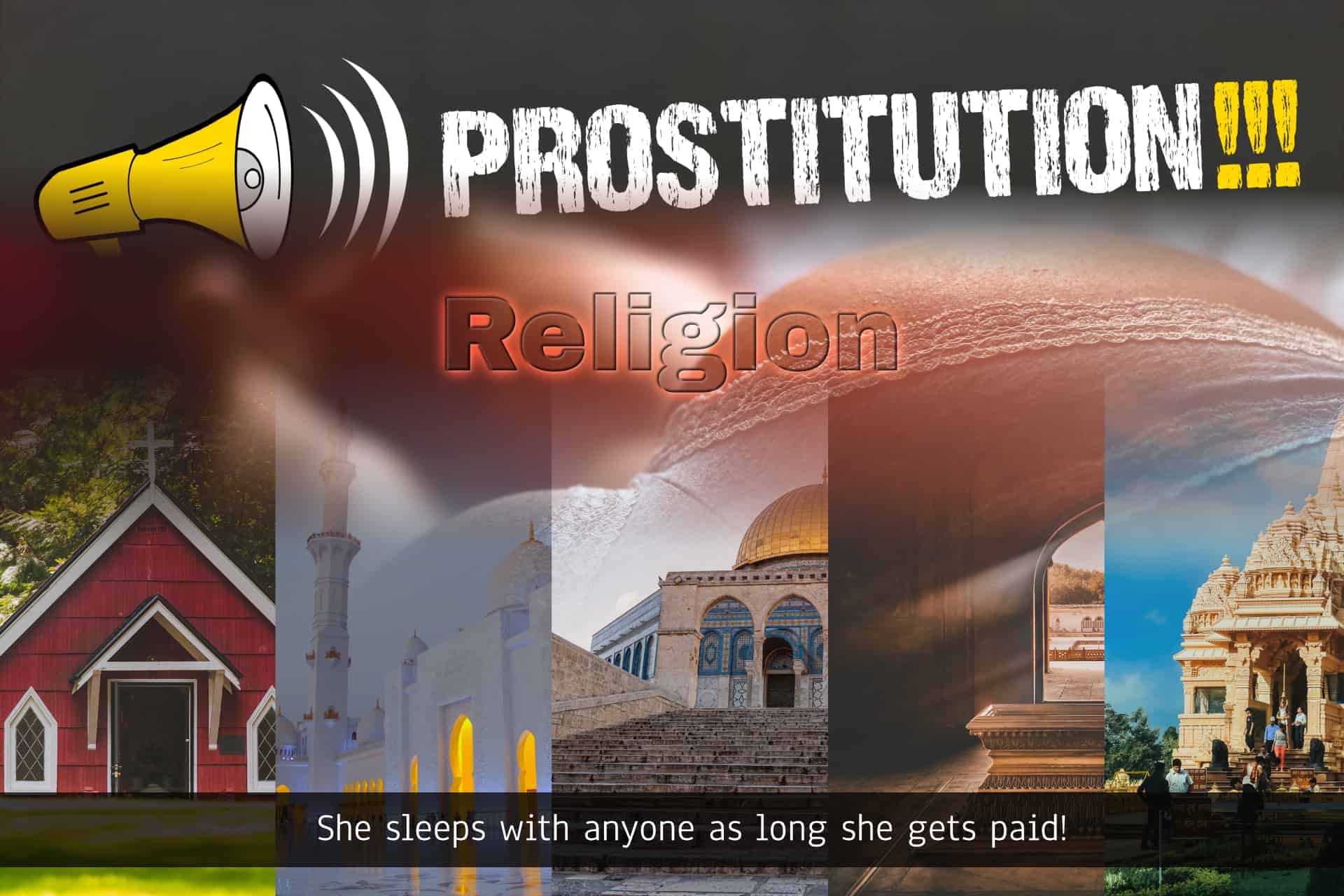 An extraordinary phenomenon akin to a dark cloud hangs over the entire world. It has developed openly, while its true intention is kept secret. To think of religion, its spread, and its evolution is fascinating; however, understanding its insidious deception is crucial and a long journey for many. Today we explore the point of God and Religion and whether religion equals God.

Everyone and anyone, when the spirit in them awakens, and the fact that this world is more than making money, inevitably runs into the dilemma of where to go. They want to be amongst others, a group mindset, with this need leading to the pull of religion. Is this a trap, or is this the true path to God?

The religions under the microscope are the institutions which have positioned themselves in the mainstream and the avenue to God. Christianity, Islam, Buddhism, Judaism and Hinduism are well-known culprits that perpetrate doctrines that fall very far from the truth.

The question can take many forms, but the root of it is simple—the association of God with a particular religion or denomination.

I believe in the scriptures. Having read through them many times and investigated many topics, I am still looking for where the scriptures speak of religion as it is structured today. I have found the opposite. James 1:27 clearly defines religion; equally, Proverbs 5, understood by building on precepts, speaks against religion—the strange woman (harlot, adulterous woman, immoral woman, prostitute).

The scriptures speak against worshipping false gods, but today we see a different story where everyone has their idol and comforters. I am ridiculed for claiming to believe in God without religion, yet the religions pray to their god, who never answers. Their congregations sow seeds—money, in these brothels getting poorer by the second while the whores take everything from the walking dead.

The deception is so great that it is hard to mentally cope with the extent of it once you can see it. If God does not prepare you, I would not think anyone could make it through after seeing the truth. The misdirection of the elites, the Illuminati and countless other fictions are parading in the eyes of the masses, but the enemy dwells amongst them. He is right in their midst, but they cannot see him. He obstructs, harasses, pokes and prods everyone that does not worship him or have the mark of the beast.

Many people will ridicule what I have said to discredit and console themselves because their eyes have not been opened. The stark reality of the situation will be avoided because knowing they are not on the correct path is too much to bear, and their entire lives will be called into question. Only the brave, the wise amongst them, those who genuinely seek the truth, will conquer their fear and move in the direction where the Holy Spirit leads.

It is right before your eyes, but can you see it? Do you think the constant onslaught against the Most High is an accident? Do you think obstacles in every avenue of your life when serving God are coincidental? You walk among those who serve Satan, many without knowing it, and their kingdom is not divided.

The Assault on God

You will find numerous assaults on the existence of God on social media, television, books and other platforms, with the angle used to discredit him coming via religion. The enemy creates today’s religions—the “abomination of desolation” created during the Grecian kingdom (Daniel 12:11, Matthew 24:15, 1 Maccabees 1:54-58).

When religion sins, God gets the blame.

I counsel that religion has nothing to do with God. In addition, I say that religion attacks God at the core. The institution that stands at the forefront and harvests anyone it gets its hands on who wakes to the truth.

The institution positions itself in the middle of the road for anyone seeking God. Every heathen media outlet advertises it as the way to God, a great indicator of who runs it.

The only thing we need to do is believe in the son of God and keep the commandments of God. Nothing more, nothing less. We are here to worship God, and no institution on earth owns God, and none will get you into the kingdom.

Don’t be afraid to walk the road alone since God is always standing beside you.