She sees demons all around 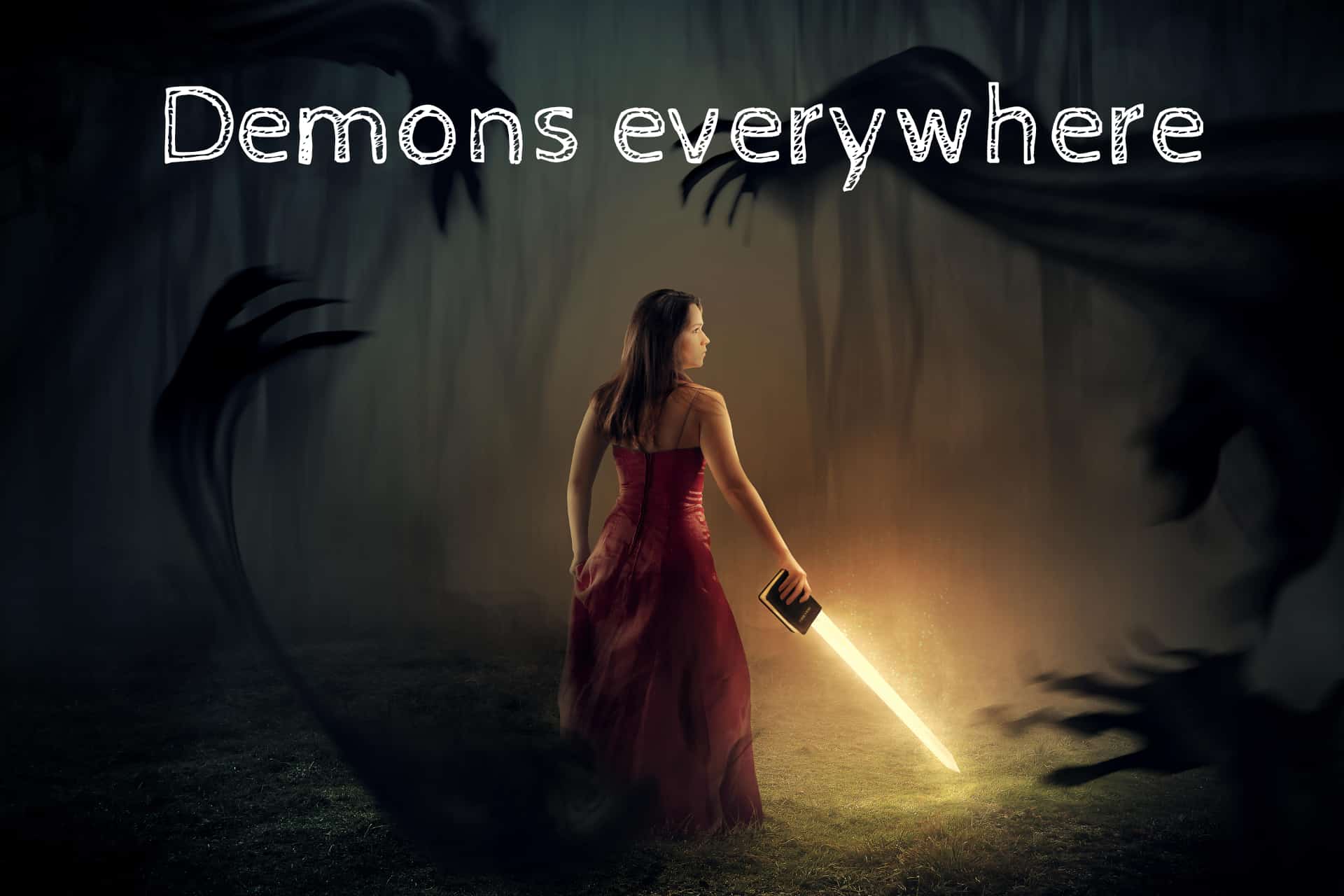 She forgot for a while about that prayer. A selfish prayer, fueled by the fire under her ass (not her donkey, but rather her behind) and the desire to have supernatural powers. How childish. Nevertheless, she prayed for it in ignorance, arrogance, and naivety. She wanted to see the supernatural with the Most High standing behind her.

The fire inside her gave her the desire to dive into different areas that would scare the sleep out of most people. This fire relentlessly drove her — or was it light. Whatever it was, it was indeed lighting a path and pushing her down it. She didn’t know where the road would lead, but she was going anyway.

She looked into the mirror and saw an insane person staring back at herself. What was happening to her? What was the source of this unstoppable urge? She transformed into a new person in full view of the eyes of the world, but they did not accept her. Whatever was happening pushed her away from them; it hauled, shoved, tugged and pushed her forward. But where? How could she stop this transformation? Did she want to?

If she had known in retrospect what the cost would be, would she have tussled to be let off this ride? Would she have jumped out of that moving car? Surely that cost would be less! Would it, though? Those with trust would say that it cost far less to stay on the ride, but those who look back at the world would exclaim, “the cost is too high”, and hightail it out of that car immediately.

As quickly as she was lit, she was doused with water. The passion that had fueled her to make that prayer was out. She could not understand where the desire came from and why it suddenly disappeared. It was like having a soulmate torn from your inner being. She felt guilty, inadequate and empty. She had committed to this journey and now look. It doesn’t seem fair. Where did the light go? She prayed for the light–the morning star, and that calming hand that came with it, but there was no answer. Could she have been wrong?

So many questions and so few answers.

If she is supposed to be walking this path, how come the fire had been put out? She stumbled along, but she could feel the life draining from her body. She was not happy about the dimming light, but fighting against the tide of the world without that hand is not possible. What was she going to do?

And in the blink of an eye, the fire was back. This time it pushed in a different direction. She was just along for the ride and taking it as it came because she had no idea what was going on.

She was just happy to have that steady ship back under her feet.

The years passed, and the sweat poured from her brow. She thought of all the discarded remnants of her life. In her wake was a battleground of dead pieces of her life scattered with disdain for where they landed. Who was this doing this? It had cost a lot without any end in sight. The ante just kept raising, even when she didn’t think she had any more to give. Nonetheless, it extracted another piece.

If this was the journey to light, she pondered why she couldn’t see anyone else was giving up everything? She yearned for a companion, but the more the fire opened her eyes, the more she could see the blind stumbling. She could see those who were not on the same side as her.

She didn’t understand what she was being shown at first. She didn’t know how she was being led. The guide didn’t speak like ordinary people, and even though he could tell her, he wouldn’t. He showed her many things and pointed her to read the book. With a fierce countenance, he chastised, and with eyes of incredible depth, he loved her. She felt weak and confused. She felt like giving up at times. She had invested so much, and now she knew the cost of giving up. She couldn’t do it.

Why couldn’t he just speak like everybody else? She would believe him. Then it came to her — would she be able to resist when they came at her in full force? Would she have the conviction and presence of mind, body and spirit to call on him always? Would it be her identity to lean on him and understand that he cannot be defeated, and therefore, the world could not defeat her?

She slumped in her chair in defeat. She was not smart enough, strong enough, or enough of anything. She stared in a daze. Despite her state of shock at the many things revealed to her, she had a knowing inkling it was only the tip of the iceberg. She enlisted in his army and yielded to the general–there was no other way. Whatever he said, that she would do.

Had she known the cost, would she have started the journey!?

He was building her, making her stronger and wiser. She was talking to him all the time. Was she crazy, she wondered? That ship had already sailed. He told her what to do and when to do it, and other times, he let the past lessons guide her footsteps. She laughed when she thought of another prayer she prayed. “Abba, if it is not your will, destroy it”. The next day she couldn’t stop laughing; he had destroyed it.

If she didn’t understand, she would cry. She wasn’t crazy after all–in her own eyes anyway.

She took a second look with new eyes at the people around her. She could not believe what she was seeing, and she imagined him smiling at her and was comforted. Oh, how he had answered her prayer many years ago, but not in the way she expected. She expected the television’s (which she had given up years ago) depictions of demons. Her jaws dropped wide open in shock.

They walked around with smug smiles on their faces feasting on the things of this world. They signalled to each other cleverly and architected the cogs of the world. They were large and small. They were your neighbour and your governor. They always wanted to lead from the front–to guide the flock. They operated with one goal; their eyes were single. She put her head in her hands, and she was going to cry. We were being…, she caught herself. They were devouring the people. The world was blind and being eaten alive.

She knew the food would not believe her. She also knew that her guide did not do anything without a purpose.

She realised how few were going to walk this path and how important each one was to him.

She knew people would take it as a metaphor or an allegory, but she also knew that one would see it for what it was. Literal. She wanted to show them the way, but now she understood that she could not–not really. There is only one who knows the way. He put her face to face with the enemy, showing her how much they hate him and are fighting against him. He revealed to her how they identify allies and plan generations ahead. He had her look them in the eyes, but she was there to learn, not to fight.

She was sad, and she loved him.

If two from a city are saved, that would be a miracle.

If she knew the cost, would she have taken the ride? Count the cost because it costs everything.

The Mark of the Beast Series (Totally Uncovered)
20th January 2022